Internet censorship all around the world
somerandomusername July 30, 2022, 4:59am #1

Splitting off from Encrypted DNS (DoH/DoT) + SNI block in Indonesia since this is less specific:

They’ve added a few websites (Steam, Epic Games, Origin, PayPal) to the blocklist, presumably due to not being registered as a PSE/Electronic Systems Operator:

This seems to be enforced on most mobile networks such as Telkomsel, XL, and Tri, along with some home networks such as IndiHome, BizNet, and FirstMedia (note that some providers like MyRepublic (blocked as of 31/07), MNC Play, and CBN seemingly haven’t blocked them yet):

@
So it's finally happened @kemkominfo just blocked @Steam and @OriginInsider in Indonesia Good bye all of my games. Currently using @IndiHome and I can't access both sites. Ga punya kerjaan lo kntl

Note that PayPal has actually registered (apparently the registration data was garbage and likely from an imposter), though it’s currently “temporarily halted” (see “SE dihentikan sementara” on the foreign PSE list)

The government announced that PayPal has been temporarily unblocked for 5 business days (until 5 August), and cellular networks have already unblocked it (home networks seem to be slow at updating their blocklist though, as they’re seemingly still blocked there for the most part)

Late, but the government unblocked/“normalized” the blocked sites indefinitely: 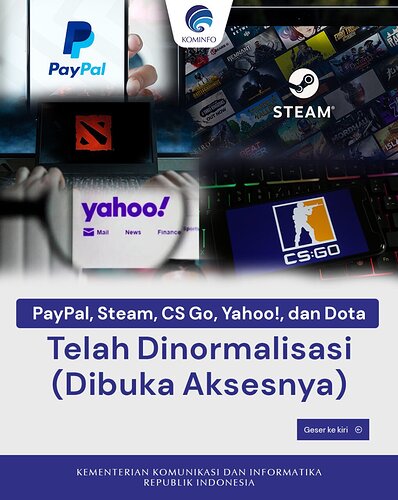